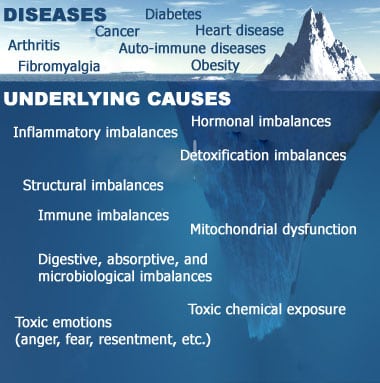 Functional Medicine is patient- centered healing at its best. Instead of looking at and treating health problems as isolated diseases, it treats individuals who may have bodily symptoms, imbalances, and dysfunctions.

As the following graphic of an iceberg shows, named diseases such as diabetes, cancer, or fibromyalgia might be visible above the surface, but according to Functional Medicine, the cause lies in the altered physiology below the surface. Usually, the cause of the disease and its symptoms is an underlying dysfunction or an imbalance of bodily systems.

Named diseases are just the tip of the iceberg. Below the surface, according to Functional Medicine, are the real causes of a patient’s health problems.

Our current healthcare system treats just the tip of the iceberg (Diseases), it rarely leads to long-term relief and vibrancy. Identifying and treating the underlying cause, as Functional Medicine does, has a much better chance to successfully resolve a patient’s health challenge.

Ask yourself… “Is my current approach to my disease(s) helping me to get healthier or is it just treating my symptoms?” It is time to pick a direction…

Treating Symptoms vs. Treating the Person

In the dominant health care model today, medication is used to get rid of people’s symptoms. If the patient stops taking the medication, symptoms generally return. Functional Medicine approaches health problems differently. Instead of masking the problem, it aims at restoring the body’s natural physiology.

For example, conventional doctors would normally prescribe pharmaceuticals like Prilosec, Prevacid, or Aciphex to treat acid reflux or heartburn. When the patient stops taking such drugs, the heartburn symptoms come back. In contrast, a Functional Medicine practitioner might find that a patient’s acid reflux is caused by Helicobacter pylori bacteria. Eradicating the Helicobacter pylori might very well lead to the end of heartburn symptoms, permanently. You may be surprised to learn that the concept of Functional Medicine isn’t new. It actually represents a return to the roots of modern scientific medicine, captured in this statement by Sir William Osler, one of the first professors at Johns Hopkins University School of Medicine and later its Physician-in-Chief: “The good physician treats the disease; the great physician treats the patients who has the disease.”

Over 18 years of chiropractic experience